The next tower in downtown is a little closer to construction. The East Tower project, planned as part of the Eurovea City concept, has received a valid EIA final opinion and is moving into territorial proceedings. The developer of the project, the company J&T Real Estate, also obtained an opinion for the congress center, with which it originally considered the concept, but for the time being, does not count on it.

The East Tower, still officially called the Congress and Administrative Center Pribinova Street in the EIA documentation, should be built on the north side of this street, east of Tower 115. Until recently, there was a two-story building of the Versus printers, but it disappeared in preparation for the largest project in the area - Eurovey II. Today, the site equipment is located on the site, but at the same time, there is a relatively deep pit, which will allow a quick start of construction when the developer decides to implement the East Tower.

The documentation recalls in detail the information known today: the project will create a tower, which together with Tower 115 will form a square, connected to other similar areas within Eurovea City. Materially, it will be a similar object, only slightly shifted towards Pribinova. The tower will have 25 floors and a height of fewer than 102 meters. The first two floors will be slightly inserted, which will make the construction system stand out, forming columns in the shape of letters X. The layout will also be inserted at the level of 9-11th floors, which again makes the advanced columns stand out. The corners of the tower will be rounded and the facade will be double, which will soften its effect. A restaurant could be located on the top floor, otherwise, there will be offices.

The EIA also specifies the details of the currently suspended plan of the congress center. This was to form the northern edge of the square, had two raised floors and a representative flagpole was to be placed in front of the entrance. On the first floor, a large congress hall was to be located, passing through both floors, and three smaller ones, together with a catering facility. Three more congress halls and several meeting rooms would be located on the second floor. The given setting was to allow events for several thousand visitors at once. The architecture would follow the East Tower in the form of rounded corners or an exposed construction system.

Despite the fact that the Ministry of the Environment has approved the construction of the entire project, including the congress part, the developer is currently preparing only for the implementation of the administration. "We are still preparing the East Tower project so that an administrative tower will be built in the first stage and a multifunctional cultural and congress center with a capacity of 1,500 visitors can be established in the second phase," said Pavel Pelikán, Executive Director of JTRE. However, this should depend on the solution in Nový Lido, where the theoretical construction of a larger center is being prepared. "If we implement the National Cultural and Congress Center in Nový Lida, it will not make sense to build more in Eurovea City," explains P. Pelikán.

The developer thus requests the start of the territorial proceedings - resp. requests the issuance of a proposal to issue a change in the zoning decision on the location of the building - only for the East Tower. The project already has a positive opinion from the Capital. The developer preliminarily assumes that construction could take place between 2022-2025. It intends to invest approximately 100 million euros in the project. 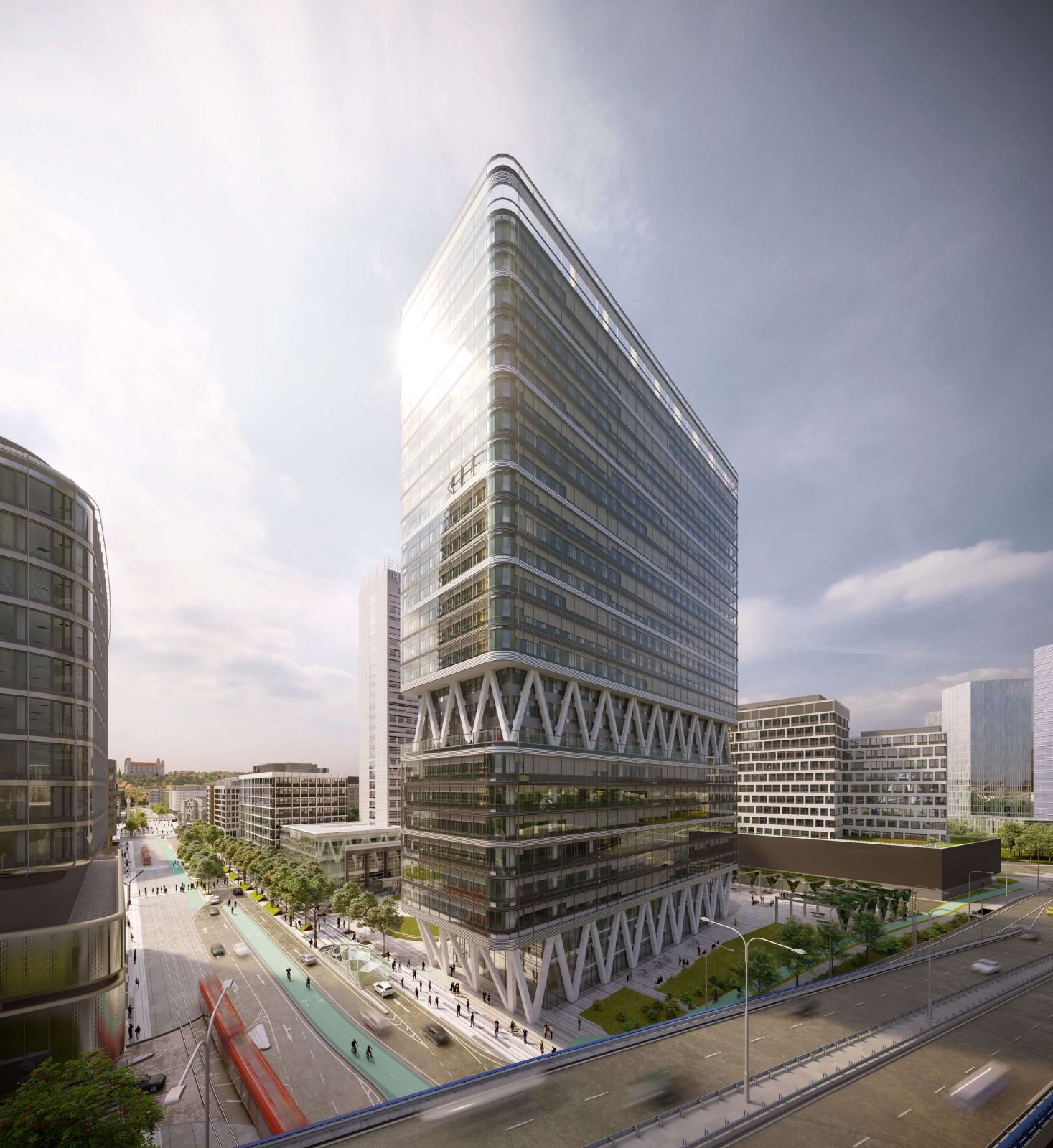 Although it is true that the implementation of the NKKC would significantly reduce the prospects of the congress center in Eurovea City and in contact with the East Tower, it is not entirely correct to rule out this intention. The successful establishment of a congress center in Bratislava could lead to a strengthening of Bratislava's influence as a congress destination, which will gradually require the expansion of existing capacities. In such a case, a preliminarily permitted plan in the new city center will come in handy - for the location of the congress center, it is a very good location in good access to transport hubs, hotel, and office capacities and theoretically also the tram line.

The architecture could also be at a relatively good level, although this is especially true of the East Tower. Behind the proposal is the "court" office of JTRE, GFI, for which this is one of its best proposals. The combination of double facades and rounded corners add elegance to the tower, while the building will create an interesting contrast to Tower 115, which has long been the dominant feature of this part of Bratislava. The congress (and cultural) center would perhaps deserve a more extravagant expression, but if a more attractive main center is created elsewhere, then this will be quite acceptable.

However, the issue is not only the implementation of the congress center but also the administrative tower. This will provide approximately 39,000 square meters of office space, which will be located in a lucrative part of Bratislava, but in the current circumstances, the capacity is a problem. Investors are not in a situation where they could afford speculative construction (ie without a well-known large tenant) and shared service centers in the Slovak capital have probably reached the zenith of their development. East Tower will have to hope for a massive renegotiation with an existing company.

At the moment, this is premature speculation anyway. The priority is above all the successful dismissal and preparation for the immediate start of construction as soon as possible and appropriate. The East Tower will be an important part of Bratislava's center and, for now, its eastern edge. In the case of the creation of a tower on the site of Ryby, it can also co-create a kind of "gate" to downtown. The square in front of the building will complete the range of public spaces in Eurovea City, and if the considered flower planting is carried out, it can be an interesting recreational space.

Bratislava is thus one step closer to the new high-rise building, which will be another confirmation of its changing character: the Slovak capital is a city of towers, which has since been strengthened. It is necessary to build on this image and actively develop it - not only through the construction of other high-rise buildings but also through branding, interventions in public space, the organization of events, or the development of cultural facilities in this part of the city. Perhaps one day the capital could buy the congress center project and turn it into a quality cultural center.

The city on the Danube is specific for its contrasts, which apply to almost everything and are also part of the official motto - Small big city. A stronger emphasis on the use and activation of modern and new parts of the metropolis would be a confirmation of this image and proof that Bratislava is not only about a glorious history, but also about a promising future.