The preparation of The Mill starts, the developer is revealing further visualizations

Although The Mill's office project from Immocap is still in territorial proceedings, preparations for its construction are already beginning. Until now, there was a warehouse-administrative building on the plot where the new complex is to be built, which is already being rehabilitated. In addition to offices, there is also to be a publicly accessible space for recreational purposes.

The preparation of the project started more intensively in 2017 when the investor organized an invited architectural competition for the next stage of the series of office complexes Bratislava Business Center with serial number 6. The DKLN studio prevailed in a well-occupied competition. The concept was gradually developed and its form was influenced by the development of the office market - therefore the developer also took away from the generosity originally presented in the competition. The project has shrunk and its appearance has evolved.

The final form of the project was revealed only in the summer of 2020 together with the publication of the documentation for the environmental impact assessment (EIA). At the corner of Mlynské Nivy and Plynárenská streets, an office monoblock is planned, consisting of a pair of materials, together forming the letter T. The lower of the materials will have 12 floors, the higher 16 floors. The total height of the building will be 69.1 meters. On the four underground floors, there will be parking for employees, on the ground floor there will be an entrance lobby, accessible from the north side. From the south, it will be through one of the rentable premises. At the level of the 13th floor, there will be residential terraces for employees.

The developer planned to create 25.7 thousand square meters of office space in the building, of which 25 thousand will be intended for offices. In February, Immocap said that much of the space - up to 20,000 square meters - was leased by an unspecified multinational company for its new headquarters. According to information from the corridors, it could be Henkel. The potential tenants in the rest of the building are not known, as are the services that will be located here. At this stage of preparation, however, it is still a premature question.

The development will be another significant completion of the office zone in this part of Mlynské Nívy. In addition to the relatively significant mass and architecture, the character of public spaces in the immediate vicinity will also change. At the entrance from the north, a larger landscaped area will be created, although the greenery will be located mainly in pitchforks. In the future, this does not preclude further, today only theoretical construction. The traffic situation in the area will also change, which will be helped by 400 new parking spaces. However, with regard to the planned certification in the LEED system at the Gold level, the developer will also have to create an adequate volume of parking for cyclists.

Today, the project is still undergoing permission, it has a positive binding opinion of the city and a final opinion of the EIA. The investor applied for a zoning decision. The pace of permitting and submitting applications is relatively fast - the developer is obviously trying to deliver the building for the client as soon as possible. Remediation work on the former warehouse-administrative building has already begun directly on the plot. The definitive past is likely to be in a few weeks.

The implementation of The Mill itself is planned for the years 2021-2023. At that time, the entire northern part of Mlynské Nivy Street should basically have its final appearance, from its beginning at the intersection with Street on August 29 to the Jarabinka project. The Mill will become part of one of the most important city axes in Bratislava. 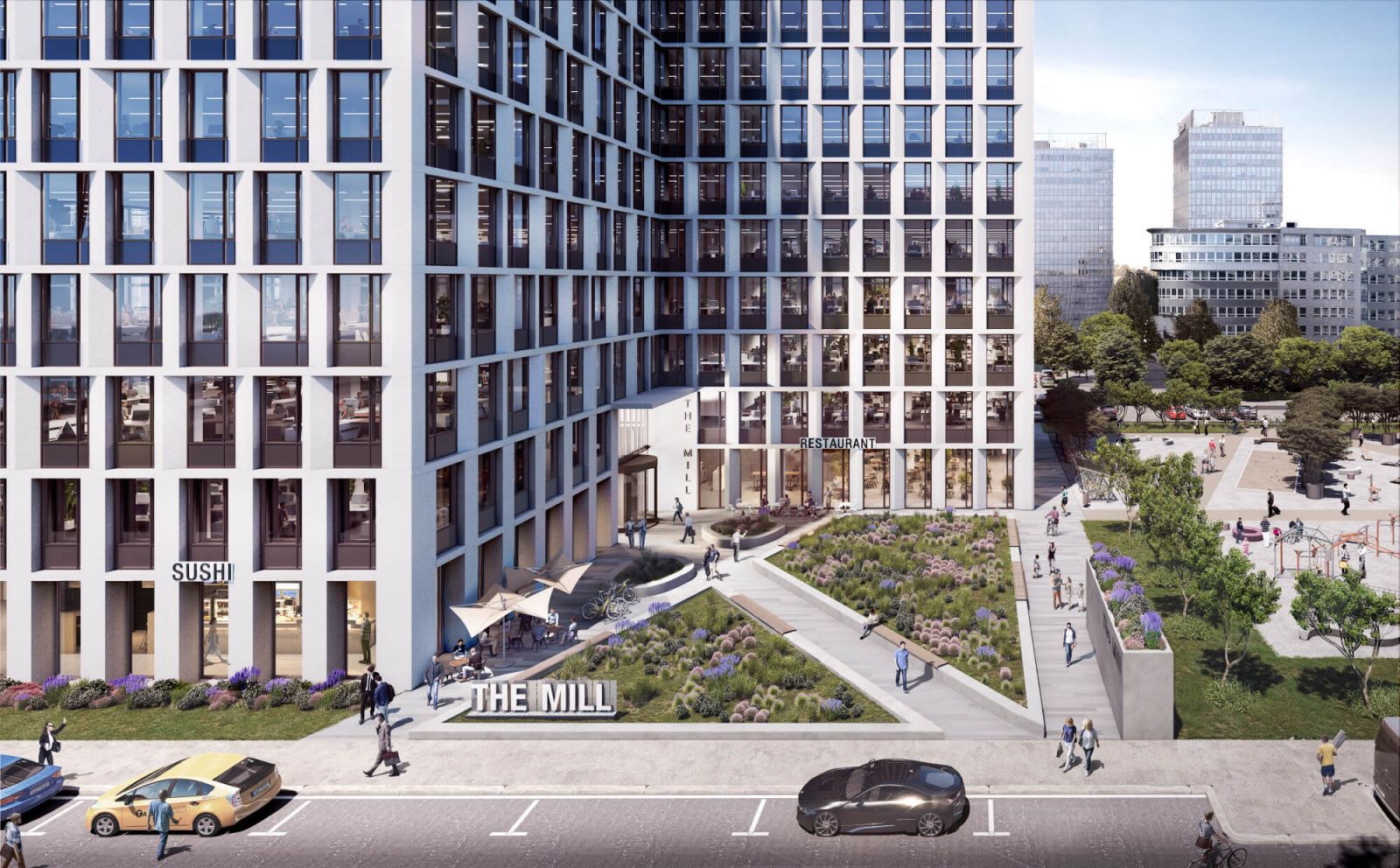 Indeed, projects such as Nivy Station, Nové Apollo (both HB Reavis), Discovery Residence (RMC Properties) or the aforementioned Jarabinky (Sibareal), together with existing projects, give the street a significantly different character, compared to, for example, only a decade ago. Investor interest is gradually shifting to the south side of the street, where there is still more room for development. The preliminary form of a large plot of land south of Jarabinky, where YIT Slovakia plans to build, is already known.

Implemented and planned interventions will not only change how the development of the street will work but also it's functioning. Undoubtedly, there is a massive increase in traffic, which its current form will not bear. The street will have to fundamentally change its appearance in the section between Košice and Baikal streets. On the other hand, it would not be ideal to be inspired by the section between Karadžičová and Košice - at the moment it seems that the road, which is almost as wide as the motorway, did not have to be so wide at all and could free up even more space for pedestrians.

In the context of Bratislava, the mill floodplains represent a unique opportunity for the emergence of a city class (or boulevard) of a truly metropolitan character. Their width exceeds 50 meters, which is a huge space for the emergence of the street, where there is more than enough space dedicated to all types of transport and the creation of adequate proportions for public space. The Prague Manual for the Creation of Public Spaces contains (p. 75, slide 77) a model profile of the city axis 40 meters wide, where it was possible to place a tram line, two lanes for cars in each direction, relatively wide cycle lanes, tree lines with a parking lane and sidewalks 6.5 meters wide. Mill floodplains are still 10 or more meters good. This would allow the emergence of perhaps two rows of trees.

In addition, the position of the street in the transport hierarchy of the city must be kept in mind. As a result of the development of the south-eastern parts of Bratislava, there is growing pressure to improve their connection with the massively developing new center of the metropolis. Today's radials are overloaded and do not allow the placement of tram or BRT (Bus Rapid Transport) track, or. blocking for years as long as the construction of such lines is completed. In this, Mlynské nivy has the advantage that their complex reconstruction will cause virtually no problems of a city-wide nature.

This also differs from Přístavná Street, where the location of the tram line is also proposed. The traffic significance of the Port will increase after the completion of the entrance to Bratislava from the R7 Expressway - for drivers coming from the suburbs, it will be the fastest connection to the center, where new office capacities are rapidly added. They will also move along to her to The Mill. However, the space situation is limited and the extension of the street by seven meters, which is needed for the tram line, would mean a deterioration of the quality of space for non-motorized modes of transport.

Therefore, it is absolutely necessary that the considered tram line, which is to connect the new city center to Podunajské Biskupice or Vrakuňa in the future, leads through Mlynské nivy. The capital is currently considering where the track will lead, and although it cautiously suggests that it could really be Mlynské nivy, the final word has not yet come. Hints from visualizations (including the ideas of The Mill) can therefore still be taken as ideological visions.

In the pan-European context, Bratislava is a small and rather provincial metropolis, yet it is moving step by step. It's time to finally get a class of a truly metropolitan character. In addition to appearance, it will also be an important transport axis that will help improve the quality of life of a large number of its inhabitants. In combination with the attractive contemporary architecture of projects in its vicinity, one of the modern symbols of the city could emerge.

The National Cultural and Congress Center is a little closer to reality. So far only in the study

The Mill office center in Bratislava also counts on a kindergarten